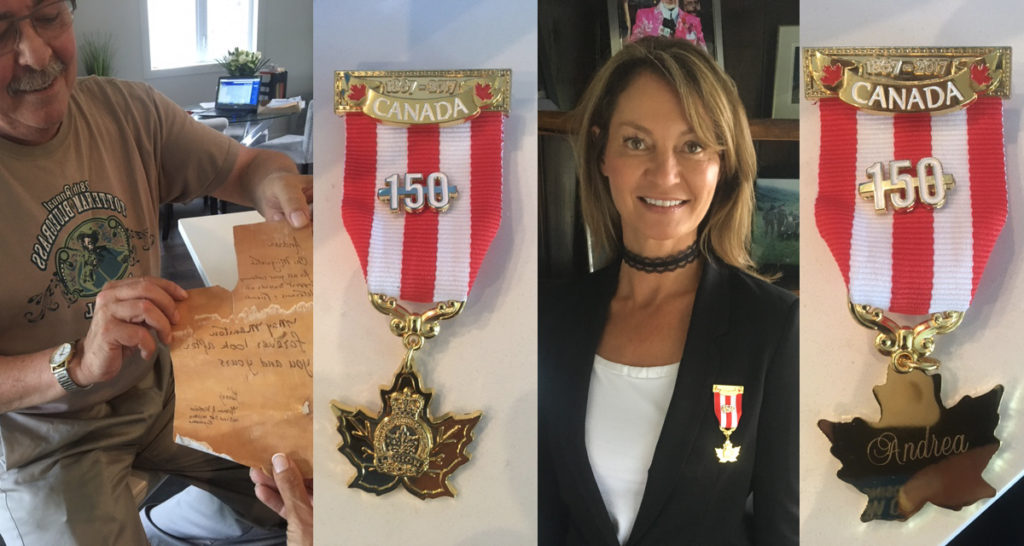 Last week, I received one of the most incredible gifts I’ve ever gotten. A Veteran of the Canadian Armed Forces named Norman Matheson presented me with a medal of honour engraved with my name. Norman crafted the medal himself and gave it to me with a note he’d written on birch bark that said, “For all your continuing support of Veterans, may Manitou forever look after you and yours.”

Norman, who feels a deep connection with First Nations beliefs, explained to me that Manitou is the spiritual life force that moves all around and inside of us, driving out the pain and sadness caused by evil spirits. And just as nature and certain cleansing rituals can manifest Manitou, so can our deeds and actions. As he spoke, I started crying. Here was a man who served in some of the world’s most dangerous war zones blessing me. If anyone deserves Manitou, it should be Norman.

Having worked with hundreds of Veterans in helping them access entitlements, including medical cannabis for treatment of PTSD, I’ve seen firsthand how fragile and vulnerable sufferers of this disorder can be. This is why in my work with PTSD sufferers, especially Veterans, I’m extra careful with my words and actions. In this community, trust needs to be earned.

Considering how little help my Veterans receive when they leave active duty, it’s a wonder they can trust anyone.

Many don’t know until speaking with me that their psychotherapy is covered by Veterans Affairs Canada (VAC) along with other essential rehabilitative treatments such as physio, chiro and massage. Even when Veterans know they’re covered, a large percentage of them have no idea how to obtain these services.  The paperwork is often too overwhelming, or they live in rural areas with little to no access to internet, a VAC case worker or office.

In November of last year, VAC announced their plan to cut back the original 10 gram per day cap on medical cannabis for Veterans with PTSD. Though 10 grams per day sounds like a lot of cannabis, I can point to dozens of case files where 10 grams of medical cannabis has proved far more beneficial and less costly to the government than opioids whose side effects include impotence, severe depression and even suidical tendencies. Moreover, the cuts to the medical cannabis program did not come with any sort of extra funding for more mental health support or PTSD treatment centres.

A considerable chunk of my job consists of driving down long dirt roads to the homes of Veterans in rural areas. Often, I find them living in appalling conditions. I’ve been in homes with no running water. I’ve met guys who can’t afford food. They tell me that they went through their lump sum leave pay within six months of leaving service. This is what happens when the government takes away pensions and gives enormous amounts of money to young people who’ve never been taught to manage their finances.

Norman’s gift is not just an incredible honour, but serves as a reminder of why I need to keep going. And if this means driving down a thousands dirt roads, I’ll do it, so long as I can help our Veterans get what they deserve.

If you are a Veteran of the Canadian Armed Forces and need help accessing your entitlements, including medical cannabis, email me at andrea@scratchrecovery.com or fill out the contact form on my website www.scratchrecovery.com